Angelfish are often the centerpiece of their aquarium. As a fishkeeper, you will encounter many common diseases, including fin rot, which you should know how to identify and treat effectively.

What is Angelfish fin rot, and what does it look like as it develops? Understanding what fin rot is, how it affects your Angelfish, and how to treat it will keep your favorite fish healthy during its life.

We want to help you enjoy your hobby, and part of that process is learning what to do when you see Angelfish pectoral fin damage. Maintaining a healthy tank, providing quality foods, and policing your pets are the traits that you as a beginner need to cultivate.

What Is Angelfish Fin Rot?

If you are new to the fishkeeping hobby, you might wonder what exactly fin rot is. The term describes an active disease on your Angelfish that begins on the edge of its fins and migrates towards your pet’s body. Once it reaches the tissues on the body, you will hear it referred to as advanced fin rot or body rot.

Damage from fin rot on Angelfish occurs due to:

These are described in more detail later but note here that these organisms can occur naturally. You will see fin rot more often in the fishkeeping hobby, with poor water quality allowing these microorganisms to thrive in a tank full of Angelfish.

If you suspect fin rot on Angelfish in your aquarium, you need to know what to be suspicious (and not suspicious) of when it comes to appearances.

The tips on the fins of your Angelfish are prone to injuries, and a fresh wound is not necessarily a sign of fin rot. If the damaged area becomes milky in appearance, that is often a visual indicator of fin rot caused by bacterial infections. The damage will continue to progress up the fin with an even edge with a milky appearance.

Finally, infected fish can develop fin rot on the body if not treated. Your Angelfish will be in the advanced stages of the disease and may not heal from its wounds.

Causes Of Fin Rot On Angelfish

Now that you have a better understanding of Angelfish fin rot, you might wonder what causes the infections in the first place. Sources for fin rot on the fins of your Angelfish can include:

We think it is important to stress that long and delicate fins on species like Angelfish and other fancy tropical fish are targets for other fish in the tank. The limited space in your aquarium will lead to confrontations as your pets stake out territory or warn tankmates to leave them alone.

Observe your Angelfish and see if others are nipping at the fins. If nipping continues, removing aggressive tankmates can eliminate attacks and prevent these wounds from becoming infected with fin rot.

Can Angelfish Recover From Fin Rot?

Angelfish fin rot is not necessarily fatal, especially if caught and treated early. It can be more difficult for your infected fish to recover from the disease if it is advanced. Prevention is the best medicine (although you will need more than an apple a day to keep the vet away).

Fin rot damages tissue. Your pet can repair minor damage, but once it reaches the body tissues, the damage on the fin is not repairable. Advanced body rot is often fatal, as the infected fish have suffered damage to critical skin and muscles by then.

How to treat fin rot in Angelfish

Your Angelfish will thrive in temperatures between 77 and 83-degrees Fahrenheit. Tropical fish are susceptible to diseases, including fin rot, at lower temperatures. A simple fix can start with adjusting water temperatures.

Angelfish pectoral fin damage from diseases like fin rot will require a water change. You will want to change up to 50-percent of the aquarium’s volume to help remove bacterium and fungus. Do not forget to clean decor, filters, and substrate as well.

Water parameters are critical for your pet’s well-being. Perform a water test to check on hardness, nitrates, nitrites, and PH levels. Address any issues with water quality to promote a healthier environment for your Angelfish to recover.

If you only have one or two infected fish, consider removing them to a quarantine tank. That can help keep other tankmates healthy while allowing you to treat the fin rot on sick fish.

Medicines will treat the fin rot and promote fast healing. These antibiotic/antifungal treatments can also work on other diseases.

Another popular treatment is aquarium salt (for freshwater tanks, not saltwater). One tablespoon per three gallons of water is standard. We would suggest dissolving aquarium salt in a cup of aquarium water and pouring that into your tank instead of adding the salt directly.

Online sources will offer all types of advice. We recommend API’s Fin & Body Cure over treatments that use aquarium salt, malachite green, methylene blue, or Phenoxyethanol. 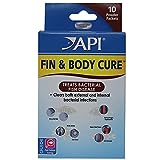 Ready-made treatments are ideal for beginning hobbyists and people with busy lifestyles. They offer proper dosages and work faster than many homemade remedies for fin rot.

Angelfish fin rot damage can occur from either bacterium or fungal sources in the water column. Fin rot can be a combination of bacterial infections and fungal infections at the same time.

Finrot occurs naturally, but it is found far more frequently in the fishkeeping hobby.

The bacterium source for fin rot is called Pseudomonas fluorescens. It can live in the soil or water. The water strain of bacteria uses nitrate instead of oxygen for cellular respiration.

Angelfish fin rot can be accompanied by fungal infections also. The fungus damage moves faster than bacterial sources, producing even edges with a milky appearance.

Poor water quality feeds these microorganisms. Fin rot can also be contagious, as the bacterium and fungus travel on the water column.

How to prevent Angelfish fin rot

Angelfish fin rot is avoidable if you exercise care. Steps you can take to prevent fin rot in your aquarium full of Angelfish include:

Avoid importing fin rot into your fish tank. Inspect Angelfish before you buy them or introduce them into your aquarium.

Monitor water quality and do regular water changes. Bacterium and fungus will find it hard to grow in a clean water column.

A peaceful tank is a healthy tank, especially for Angelfish. Fin rot often develops in wounds, so prevent overcrowding or aggressive tank mates with your Angelfish.

Lastly, remove sick fish from your community tank. Fin rot can spread, but isolating infected fish can prevent its spread.

Fin Rot On Angelfish Is Not The End

Maintaining a clean tank, proper diet, and observations can prevent fin rot or nip it in the fin before it becomes deadly. Do you have questions or comments? Make sure to leave them below so that we can answer them.

Is fin rot painful for Angelfish?

All fish, including Angelfish, can feel pain. Diseases like fin rot can damage tissue and cause death if untreated. We might not understand the level of pain, but we believe your pet can feel it.

Is fin rot contagious to humans?

No. Some diseases transfer from humans that handle fish or the water they are in, but fin rot is not one of them.